A week ago, I received a $250 donation for "AppFuse Development". This is a significant amount of cash, and unfortunately the committers can't do a "beer at the local pub". We've decided that a good thing to do with the money is to use it to buy a prize for a CSS Framework Design Contest. The AppFuse Logo Contest went well, but I also gave away an iPod to the winner.

This contest will be a bit different. First of all, the CSS Framework is not AppFuse-specific at all. It's just a structured bit of XHTML for page layout, and a number of CSS files for positioning. What's missing is a number of good-looking templates to make this framework look even better. I have aspirations of creating something like CSS Zen Garden - but with more of a web-application flavor. Hopefully we can use the same submission guidelines as well as offer the contest's themes for anyone to use. The CSS themes from this contest should be usable in corporate intranets, as well as customer facing applications. Sure, wacky designs are cool, but sharp and clean are better.

I hope to start this contest as soon as I've raised some funds for good prizes. Of course, donating good prizes is most welcome too. In order to provide some motivation, I'm going to do something that will hopefully inspire you to donate. It's butt-ass cold in Denver this week, and it's not warming up anytime soon. Here's the current forecast from the local news channel: 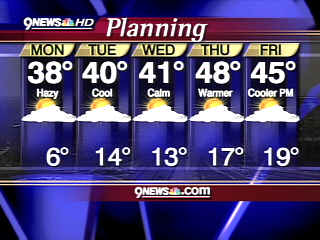 So to try and raise money, I'm going to ride my bike to work every day this week. Will this inspire folks to donate? I don't know, but it's worth a try. I'll try to be in the office by 9, and won't be home before 5. This should ensure that it's good and cold out. Furthermore, I'll blog about my ride everyday, and hopefully snap some pictures as well. It's supposed to snow tonight, so this should be good. 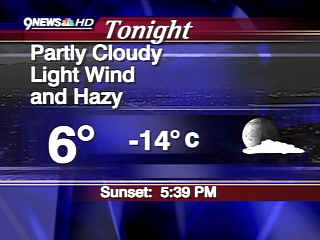 Remember, anything will help - and all donations will go to a good cause. I plan on starting the actual design contest next week sometime. Now it's time to donate using the button below - and watch me freeze my ass off this week!

RIFE: Which template syntax looks best to you?

Many times I have wondered why people are so reluctant to investigate RIFE. After having asked around a bit, the most recurring critique was that our template syntax is too arcane at the initial glance. Somehow the look of the tags syntax pushes people away without them ever checking out any of the features of our framework.

Ironically, none of the users consider the syntax to be a problem. Many even love how it stands out while still being totally invisible to a browser or an XHTML editor.

Still, initial adoption seems to be all about appearances, so I think this issue needs to be addressed. That's why I'm asking you, the non-rife users which alternate syntax looks best to you. [Read More »]

I'm one of those folks that thinks RIFE's current template syntax is difficult to understand. I was scared away from RIFE for this reason alone. It's good to see them asking the community for a better formula.

There's one thing I've learned from leading an open source project: your users aren't always right. Just because they like the way things are done, it doesn't make it the best way to do it. Often, developers merely like something because they've learned it, and would rather not learn something new. Look at all the folks that prefer Struts, yet have never tried another web framework.

Personally, I like Velocity's variable style, which is now used by JSP 2.0. Most new Java web developers are going to learn JSP. If you can make the transition from JSP to your template syntax easier, you'll likely get more users.

Last week, I flew out to San Francisco on Monday evening to meet with a client. My meeting was on Tuesday, and I spoke with Julie shortly before flying home on Tuesday night. No, she wasn't mad I missed Valentine's Day - we're both aware it's a Hallmark Holiday. She said that Jack had a rough day - going through something like 20 diapers. When I arrived home at midnight, he still wasn't feeling very well.

The next morning, he threw up on me after drinking a bunch of milk. The vomiting continued for 2 more days and got really bad on Thursday. He couldn't even hold down water. Thursday morning, Julie took him to the doctor, and they said it was probably Rotavirus. He'd lost 3 pounds, which is a lot for a guy his size. Thursday afternoon, we noticed he was turning white and was very lethargic.

Julie and her sister (who is a nurse) took Jack to the emergency room Thursday evening. They were planning on waiting a few hours for anyone to see him. Instead, they took him right away and hooked him up to an IV. His glucose level was at 36, which is way below "very bad". He recovered nicely after getting some fluids and was back home by 9:00 p.m.

Today, he's back to his normal self - laughing, crying and bugging his big sister. I heard Rotavirus lasted 7 days, and it appears to be true. Here's a picture we took of Abbie and Jack yesterday - you can tell he's not 100%, eh? ;-)