Howdy! My name is Matt Raible and I am the developer and maintainer of this site. It mainly consists of my thoughts and opinions on the technologies I use and develop with. I've had quite a ride in the last decade, serving as the Lead UI Architect for LinkedIn, enhancing Evite.com with GWT and Grails and building a kick-ass team of developers as the Chief Architect of Web Development at Time Warner Cable.

These days I'm a Developer Advocate at Okta and work on the @oktadev team.

I write a lot of technical blog posts on the Okta Developer Blog and articles for InfoQ. I'm a fan and developer of the JHipster project. If you're into Spring Boot and Angular (or React), you should check it out!

I develop on and maintain the JHipster Mini-Book and the Ionic for JHipster Module.

I've written a couple of stories on this site where you can learn more about me, check them out if you're interested: 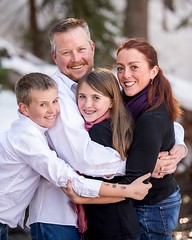 Matt's Biography: A Montana native who grew up in a log cabin without any electricity or running water. After hiking to school a mile and a half every day (and skiing in the winter), he would arrive home to a very loving family. "The Cabin" is a beautiful and awesome place that will always be near and dear to Matt's entire family. Even without electricity, his father, Joseph, connected them to the Internet using a 300 baud modem, a Commodore 64, and a small generator. CompuServe was the name, slow was the game. Matt became inspired by the Internet in the early 1990s, and has been developing websites and web applications ever since. He graduated from the University of Denver in 1997 with degrees in Russian, International Business and Finance.

Matt currently resides in Denver, Colorado and is the proud father of Abbie and Jack. He consults as a Web Architect for Raible Designs and is always striving to find the best solutions for developing web applications. His current technologies of choice can be found in JHipster and AppFuse.

Matt met Trish McGinity in June 2010 and it changed his life forever. They were married at Holland Lake in 2013. If you like Matt, there's a good chance you'll like Trish even more! She excels at horseback riding, skiing, loving, laughing and having a good time. You can see Trish's amazing photos at mcginityphoto.com.

When he's not cranking out code, Matt prefers to hang out with his wonderful family, ski/raft/hike/mountain bike, or drive a really kick-ass VW Bus/Van. He plans to travel the world, write for a living and hike/raft/ski/drive his way into old age.

Raible Designs is the name of the consulting company I operated from May 1998 to September 2016. It is no longer in business. You can see what I'm currently doing by looking at my LinkedIn profile.

Please contact me if you have any questions about this site, my open source projects, or my career.

This site is primarily powered by Apache Roller, which means at the very least, I'm eating my own dogfood.

Hosted by KGBInternet.com using Apache as a front-end, Tomcat 8 as a backend, and I get my own JVM. Runs on Java 8 and gets lots of hits per month.