"Maattttt... it's time to get up!" My mom sings from the kitchen on this early December morning. I slowly open my eyes, having just had my blissful dream snapped, I'm a little annoyed. My bed is incredibly warm with the goose-down comforter that Mom made me for Christmas. She made one for both Kalin and I that year - to this day one of the best presents I've ever received. "Kaaaallllinnnn... get up - you've got to get ready for school!" I groggily put on my clothes - a t-shirt, jeans, socks and tennis shoes - and make my way downstairs. I have to duck as I leave my room because the ceiling is low, and the door to my room (added by my Dad so I could get more privacy from my "pesky sister") is only ~3 1/2 feet tall. The stairs to the main floor of the cabin are very steep, but I've been trouncing down them for 9 years now, so I'm pretty good at it. 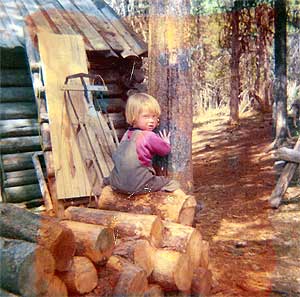 The warm glow of the kerosene lamps in the kitchen greet me as I sheepishly transcend the stairs. "Heeyyy Matti," my dad says as I enter the room. "Morning pops," I say. He is sitting on the oven door of our antique wood stove - possibly one of the best spots in the house and definitely the warmest. My mom asks, "Do you want huckleberry pancakes for breakfast this morning?" "Heck yeah!" I say enthusiastically (huckleberry pancakes are my favorite - and always will be). "Well, we need some more firewood then" she says.

Reluctantly, I say "OK" and get ready to go fill the woodbox. I put on my winter coat and a stocking cap, along with my mittens. As I step out onto the front porch, I am greeted with a full moon casting its beauty on the freshly fallen 6 inches of snow. It's about 10 degrees out and the world is sparkling in the early morning darkness. Everything looks frozen in time, and it's very quite. Our horse, Babs, snorts from inside her pen, which is next to the woodshed in the back of the house. I say "don't worry, Kalin will be out to feed you soon." I pet her on the nose and tromp through the snow another 10 feet to the woodshed. There, I put a flashlight in my mouth and begin chopping wood for the cookstove. The wood is dry since it's been in the woodshed since August, and the cold Winter morning makes it that much easier. After splitting 5 or 6 logs into cookstove-sized pieces (using my left hand to steady, right hand to swing), I gather it all up. Rather than attempting a reasonable load, I get it all. It's stacked so high, I can't even see the path I walked in on. Still holding the flashlight in my mouth, I lean back, stand up, and shuffle my way back to the cabin. I yell, "OPEN UP!!" as I get near the front door. My dad gets up from the best seat in the house and lets me in. "Jeeze - didja get enough?!" he exclaims and I (breathing heavily) stumble into the kitchen as pieces of wood are starting to fall from my arms. I make a final lunge and barely make the woodbox, filling it up with no room to spare.

My sister, Kalin, is slowly making her way downstairs now. My dad yells "Kaaarrrrrrrllliiiiiiinnnnn" as she enters the room with a look that could kill. My dad says, "it's Medusa!" and he has a good point. Her long blonde hair is out of control and she has glaring looks to support the wildness of her hair. "Good morning darling," my Mom says. "Hi mom" says Kalin. "As soon as you guys are done with your chores, we'll have breakfast" says the cookstove queen. 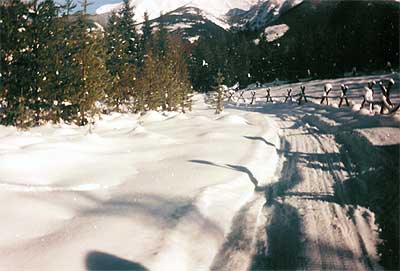 This is the worst part of the morning - leaving the warm, comforting cabin (where my parents are drinking coffee and warming themselves by the cookstove) to go feed the animals. My chores are feeding the dogs, ducks, geese, pigs and chickens, while Kalin has to feed the horse, the rabbits and the goats. In the spring, when the goats have kids, Kalin (or my mom) has to milk the goats. I trudge across the frozen tundra to get slimed by the pigs, get hissed at by the geese, and to gather eggs from the hungry chickens. I have a teapot full of hot water to poor into their water dishes, since they're all frozen. The alternative is to bring the water dishes into the cabin and thaw them on the heatstove, but the teapot is the faster, more efficient way.

Finally, after a 1/2 hour of doing chores, both Kalin and I are done and able to sit down for the awesome "huckleberry pancake" breakfast. My Dad asks us what we're going to learn that day, and Kalin says "division" - which is quickly followed by a short quiz. Neither of us are interested, but he's got a grin from ear-to-ear as he asks us what 63 divided by 7 is.

And so begins one of the best parts of the day - where my mom walks with us 1 1/2 miles to the bus stop. Today is December though, and with the fresh snow, this means we get to ski! This is probably better since I refuse to wear boots, even in the dead of winter. Tennis shoes or a hissy fit - that's what you get from little Matt. The morning ski is awesome, especially on a day like today. The snow is soft, and there's a nice base underneath from the daily commute to the bus stop (also where we keep the cars in the winter). As the sun brims the mountain peaks, we're off! It's a fast and fun journey today, and there's laughter and smiles the whole way. The single-track trail through the forest encourages us the whole way with its forests and (mostly) downhill journey.

July 2003: We're leaving for the cabin tomorrow night, and I get emotional just thinking about it. The cabin is by far my favorite place in the entire world. It's a huge part of my family and you can feel its love as soon as you set eyes on it driving up the front road. I first took Julie there in 1998, the year we met, and she moved to Denver shortly after that trip. I have a friend, Jarvis, who moved to Montana for 5 years after visiting the cabin one summer. This is the first time that Abbie will visit the cabin, and I've never been more excited to go. My parents are already there, Jarvis will be there, and another best friend from college is joining us. Jarvis is traveling all the way from Brazil (where he is a teacher) and the other is driving from Mammoth Lakes, California. It's going to be awesome. Huckleberries are just started to ripen, the wildflowers are out, and the cabin is waiting. Not to mention that Montana is, by far, the best place to be in the summer. 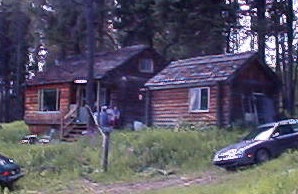 To learn more about the Cabin, and how it all began, read The Cabin, Part I.


I remember the cabin the huckleberries and the life in the Swan Valley. Great stories by the way!