Since I'm up at 4 in the morning, getting ready to study, but in the mood for a little procrastination - I might as well add a little more to my childhood story. Kudos to Greg for the encouragement.

It all started in the early 1970s when my parents first met in Bozeman, Montana. My dad (Joe) had moved to Montana with a girl, planning on marrying her. When he met her mother, she didn't like him, and he called the whole thing off. My mom (Barbara) was born and raised in Billings, MT and was studying at Montana State for her nursing degree. To make a long story short (let's get to the good stuff) they hooked up and ended up wanting to leave Bozeman. My mom mentioned that her family had a cabin in the Swan Valley - about 5 hours northwest of Bozeman. So they packed up their belongings and their friends and headed for "The Cabin." 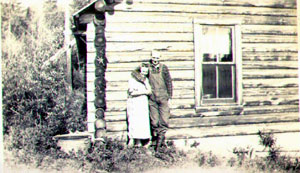 The cabin was built by my great-grandpa Matti Hill, who had come to America by way of Finland and a Russian navy ship. Matti and his wife Ann received 120 acres from the Homesteading Act of 1862, and built a cabin and sauna on the property in 1917 and 1918, respectively.

The Homestead Act declared that any citizen or intended citizen could claim 160 acres - one quarter square mile - of surveyed government land. Claimants must "improve" the plot with a dwelling and grow crops. After five years, if the original filer was still on the land, it was his property, free and clear.

So why did they only get 120 acres? Apparently, the government deemed 40 acres as prime real-estate and didn't want to give it up. Matti and Ann were successful in "improving" the land and lived there until the late 1930s. We have many pictures of my grandpa Ollie growing up there as a kid. I've always been proud to carry Matti's name, especially when my teachers would get angry and call me "Matthew" in grade school. I could retort with "that's not my name" and be 100% correct, it says "Matt" on my birth certificate.

After leaving Bozeman, my parents and their friends drove to the Swan Valley and began their expedition to find The Cabin. It took them 2 or 3 days to find it; roof caved in, windows broken out, tall weeds growing through the floor - no electricity, no running water, not even a driveway into the place. This was in the spring/summer of 1972. They lived there with their friends through the winter of '72 and had a sort of commune going. It wasn't a true commune though because that wasn't their purpose, just a bunch of friends living on the same plot of land. And a pretty big one (120 acres) at that - so who knows how much they even saw each other.

In the fall of 1972, my mother discovered that she was pregnant with my sister, Kalin. My mom told her father, Ollie, who gave my dad 50 bucks and recommended that he take her to the courthouse in Missoula and get married. On November 16th, 1972, my parents were married, witnessed by my mom's best friend (serving as bride's maid) and ex-boyfriend (serving as best man). Their honeymoon consisted of buying a bottle of champagne from the local liquor store and walking around around the block at the courthouse. 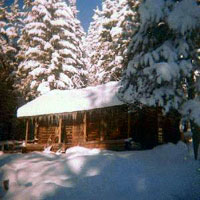 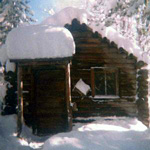 My sister was born on St. Patrick's Day (March 17th) of '73 in the southeast corner of the cabin, delivered by my father. My mom never had any pre-natal care, and didn't see herself in a mirror until she was seven months pregnant with my sister - that must've been a shock! Soon after my sister was born, my parents convinced their friends that it was time to leave - they needed to raise a family and no one was paying rent! I was born 16 months later in July of 1974. The picture on the left is a picture of the sauna on an average Montana winter. On the right is the cabin, nestled in for a long winter.

There was no electricity at the cabin, only kerosene lamps and wood stoves. We gathered our water from a stream that ran between the cabin and the sauna. Since my parents had flat wallets (jobs have never paid well in Montana) we raised a lot of animals and my mom grew a flourishing garden each year. Our livestock consisted of ducks, geese, chickens, rabbits, dogs, cats, horses, goats and pigs. I was in charge of feeding the ducks, geese, chickens, dogs and pigs - as well as chopping and hauling in wood for the cook stove and heat stove (I never realized how good I was at chopping wood until I introduced my city-fied college friends to the cabin). I used to hate feeding the pigs because they would always "slime" me with their snouts. But I was always friends with them, and apparently devastated when they were made into our dinner. Bears would visit us often, sometimes getting a pig, sometimes getting strung up after my mom shot them. 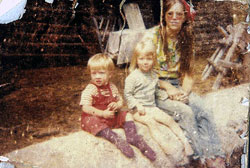 When Kalin and I were old enough, we started trekking to the bus stop each morning - a mile and a half walk. I remember waking up early in the cold Montana winters, and hiking over to the chicken coop with a flashlight. I'd gather up the frozen water dishes, thaw them out on the heat stove in the cabin, and deliver them to chickens right before we began our walk to the bus stop. Our walk to the bus stop only took 23 minutes and we were often joined by mom. My sister and mom will tell you that I talked like a broken record the entire duration of our walks. That was the greatest part about growing up in Montana without TV and little knowledge of the world - I believed anything was possible, and I dreamed out loud. A flying saucers that had chicken McNuggets in the glove box was one of my favorites.

So we lived, dreamed, worked and grew up at The Cabin until 1990. I was a sophomore in high school, Kalin a junior, when we moved to Salem, Oregon in June. The worst part is that we never knew how good we had it in Montana - we just knew what we didn't have. This goes for my parents as well. I can remember my dad always complaining about finding work and how crappy the jobs were. Now he can't wait to visit the cabin every year, and my parents hope to retire there someday. 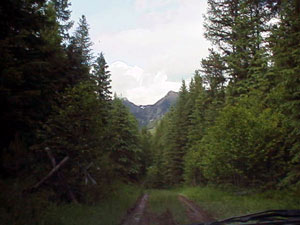 The craziest part - in 1986, when my dad was pursuing his Masters of Computer Science at the University of Montana, we had a Commodore 64 hooked up to a 300 baud modem, connected to CompuServe. We had a small generator by then to run some lights and the computer. Even crazier - we still can't get electricity at the cabin (for under $50K), but we can get DSL installed! My dad worked for the phone company for a year or two in the 80s, so we've had a phone there for a while.

I thank my parents and my sister for an awesome childhood - where life was simple and dreams were boundless.


great childhood story there, hope my kids will look back on theirs in a similar way.

Amazing story. You are really lucky to have such a childhood and spend so much time with nature.

That was great. Thank you for sharing your childhood with the rest of us. Wow..

By pure chance I came across your blog and ended up reading your story of your childhood and was reminded of my years growing up under similar circumstances in north central British Columbia (Canada) starting at age 17 (in 1971) when my parents settled up there. (Me and my family are originally from Germany) After hi school I moved to the big cities for a while (Vancouver and Toronto) to try my luck as an artist then moved back to north central BC to get married and raise a family. My wife and I raised our 3 kids in a cabin much like your grandpa's (no power, indoor plumbing, phone or running water.) (water was hauled with the pick up truck, plus outhouse, etc) That went on for two years then we bought a real house on 160 acres, albeit the house was only half finished. Took me and the wife "only" seven years to finish it. We had to do it in stages because we never had enough money, even tho I did work in the bush as a logger. ... Now in middle age, separated and the kids grown up, I am back in college, studying web design. ... WOW, what a ride it's been so far.

I had to write something because the country depicted in your Montana photos reminds me a lot of the country "up here" where I live. I have never been to Montana, but it is probably a lot like Alberta with which I am very familiar.

I can remember hearing parts of this story years age and enjoy hearing them again. We recently took our family to Montana stayed in a few cabins one in Yack river, outside of Howard lake and Libby..Cant wait to go back...

It's nice to see what your up to old friend...Take Care Man!!!

I never had known the history behind your cabin, very cool Matt! Thank you for sparking old memories of growing up as your friend, class-mate and neighbor. It was such an amazing childhood, the best parts are all about 'roughing it'. Yes, at least my family did get indoor plumbing by the 4th grade, TV with barely one channel and running water, but it never did make a difference to me either way. I loved dreaming big, not knowing any better. I thought that hiking or skiing in to your house with you and your sister (which usually required a sleep-over) was the best. To name the best part of it is though: the part where we had to milk the goats for our cereal - and were lucky if they didn't step in the buckets during the process, or the part where the geese would chase us in and out of the driveway, or the part where we could ride around on Babs bareback anywhere we wanted to go, or the part where your cat used to drop mice on Kalin's bed while we were sleeping! All great memories.