Over 5 feet of snow in 5 days! I'm still trying to catch my breath. It was lost hours ago in the 16" of fresh glorious snow at the top of 3 O'clock trees. Still breathing hard...

If your not skiing sweet turns through the trees today kick yourself. The snow is bottomless and the skies are still snowing. Looks like Mother Nature is going to keep the white stuff falling for the next few days.

We're heading up tomorrow night - sounds like it's going to be an epic weekend. I might have to buy new powder skis! 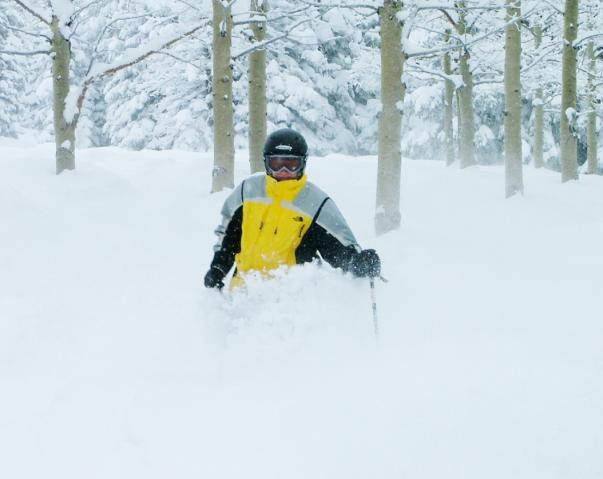 Steamboat Photo of the Day

Even though I managed to get my home network speedy again after my bandwidth speed issues, I bought a new Airport Extreme last week. My main reason for buying it was its USB device sharing feature. I have a Suse 10 box that runs Samba, DHCP, DNS right now, but for some reason, my MacBook Pro doesn't work for printing to CUPS over Samba. In my experience, printing is one of the major issues with Macs - it just never seems to work when you want to print over a network. I have gotten it to work in the past, but it's often been a wretched weekend's adventures where I end up sacrificing a goat to the CUPS gods to get everything working.

So by buying an Airport Extreme, I figured I'd have an Apple product at the center of my network and all my problems would be solved. I was wrong.

First of all, why can't there be a web interface on this sucker? Why does it require that I have a client installed to configure it? With most routers I've worked with in the past (NetGear and Linksys), the web interface might've been clunky, but it didn't require I install a CD. I initially tried installing the software on Windows XP, but for some reason it wasn't able to communicate. So I installed it on my Mac and was able to configure everything. While the setup process worked, and I was able to access the internet afterwards, this device doesn't seem to work well with my network. After plugging my printer in (an HP OfficeJet G85), I was able to add it on both XP and OS X using Bonjour. However, no matter what I sent to the printer, it'd never print. Further gripes: it might have an integrated firewall, but there doesn't seem to be a way to configure it. I couldn't find any way to do port forwarding. This stuff is so simple to do on my Netgear router.

At this point, it seems logical to return my Airport Extreme as it simply doesn't work as expected. Of course, my frustration could be from my lack of knowledge, but that's the point - I shouldn't have to read the documentation or contact Apple Support - it should all just work.