I've been excited to show people JHipster and what it can do ever since I started using it in September 2014. I've been using its core frameworks (AngularJS, Bootstrap and Spring Boot) for a few years and believe they do a great job to simplify web development. Especially for Java developers.

When my JHipster talk was accepted for Devoxx Belgium, I told Trish we were headed back to Belgium. She smiled from ear-to-ear. Belgium is one of our favorite countries to visit. In an effort to live healthier prior to Devoxx, I stopped drinking beer a month beforehand. I mentioned this to friends the week prior.

One month ago, I stopped drinking beer. I hoped it'd help me with www.21-points.com and weight loss. Unfortunately, it did not.

I told myself I'd start drinking beer again when 1) The Bus was finished or 2) Trish and I arrived in Belgium for Devoxx. Looks like #2 will win (we land on Tuesday).

We arrived in Brussels late Tuesday morning and hopped aboard a train to Antwerp. After arriving, we were hungry so we stopped at Bier Central for lunch. The mussels and beer were splendid. 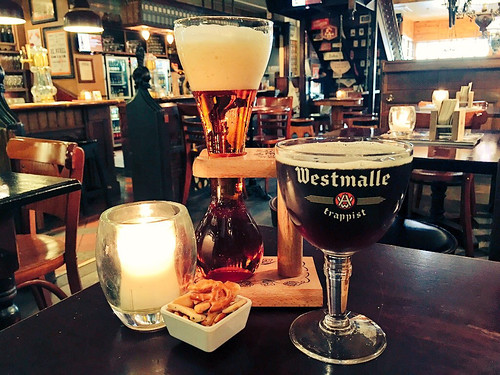