I’m thrilled to announce that Hefe, my 1966 21-Window VW Bus, is finally finished!

When I last wrote about Hefe, I mentioned he was in the shop getting a better stereo.

For Hefe's stereo, I tried going phone-only for a controller. This turned out to be a bad idea, mostly due to bit Play HD and its terrible mobile app. Also, Hefe is lowered and a bit bumpy in the front, so trying to use a touch screen while driving doesn't work very well. He's in the shop now getting a new deck installed.

My dad and I visited Elevated Audio to pick him up two weeks ago today. I’ve known the owner, Andrew, ever since I hired him to install a sweet system in Stout the Syncro in 2013. Back then, his business was named Andrew’s Installs. Fast forward five years and his business is thriving. For a good reason too, his team and their attention to detail is magnificent.

The ol’ bus in for a new stereo, adding another amplifier and retune! So pretty! Enjoy your commute, Colorado

Having Hefe finished sometimes makes me misty eyed when I drive him.

My daughter observed the other day that most people are frowning when they’re driving. I’m not one of this people. In fact, I have to wear sunglasses to hide my tears of joy! 🤣 #HefeTheBus #21windows pic.twitter.com/0LWaQkjZlx

I was especially pumped to get Hefe back because we’d signed him up to be in Denver’s St. Patrick’s Day Parade.

That’s where the untold story begins.

Last Friday evening, I washed and polished him to get ready. While cleaning him, I accidentally sprayed a bunch of water on the engine. It’s a no-no to drench a car’s engine when it’s not running. I’d done this to our Syncro six months after we got it and it might’ve contributed to our engine’s untimely death. 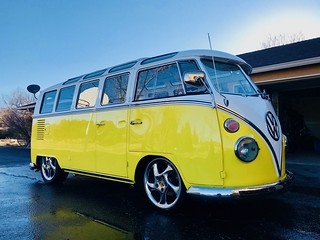 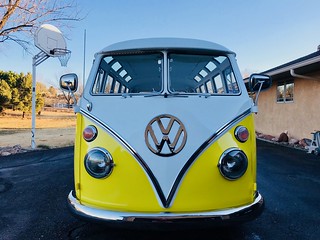 After I finished, I tried to start Hefe. The engine turned over just fine, but it’d barely fire and never catch. I pumped the gas pedal a bunch and eventually gave up thinking I'd flooded the engine. I told myself to revisit the problem in an hour; maybe things would dry out by then.

I didn’t tell Trish about the problem until I’d tried (and failed) to start him an hour later. I took off the distributor cap and dried things out. I wiggled and re-routed some wires. Moving wires around made the spark plugs fire but in the wrong order. I reverted my changes and told Trish the bad news.

We couldn’t be in the parade without a running bus.

Trish’s high-school friend was flying in from NYC with her family that night. Trish left for the airport to pick them up, suggesting “we could go skiing instead” as she left.

Shortly after, I recognized my lousy attitude and vowed to turn things around.

“Now it’s flooded,” I thought. I knew the wires were correct.

I threw on my University of Denver hockey jersey and went to my living room to finish watching them in a playoff game. They beat the Minnesota Duluth Bulldogs 3-2, and I celebrated with a cold Guinness.

Then I strolled outside, sat in Hefe, told him he could do it and started him right up. 💥

The parade was epic. 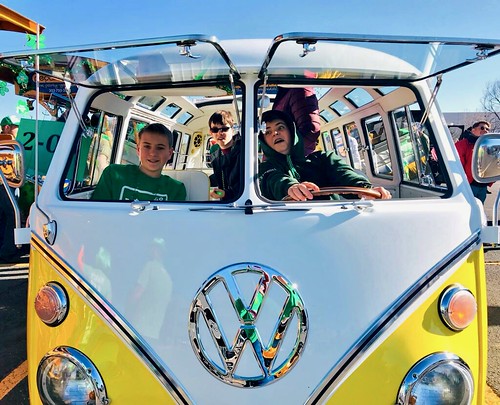 We all felt glorious; cranking the stereo, blowing bubbles out the top, dancing up a storm, and basking in the happiness that is downtown Denver on St. Paddy’s Day. 🍀🤗 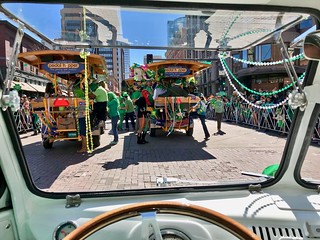 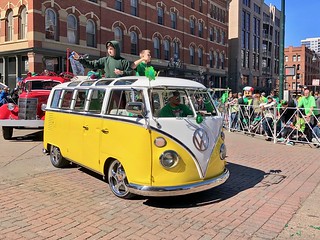 Yes, there will likely be more to do to Hefe in the coming years. That’s OK. He inspires smiles every time I drive him and providing joy to people is a beautiful experience.

Kudos to all seven Colorado shops that made Hefe possible. I won’t say he’s worth every penny, but he’s pretty darn close! 😍