As I mentioned earlier today, we made it back to Denver in one piece. Click on the pictures below to see a bunch of pictures from the trip. We flew in Thursday night and got a room at the beautiful Catamaran Resort on Mission Bay in San Diego.

On Friday morning, we picked up the bus in Encinitas, which is about 30 miles north of San Diego. The bus started right up and I was able to drive it right onto the freeway. The first couple of things I noticed were (1) the brakes didn't work too well and (2) the top speed was close to the speed limit. We parked at the hotel and walked to breakfast. When we came back, the bus didn't start when I turned the key. The dash lights came on, but nothing happened. Push starting it in reverse fixed the problem. From there, we headed to a parts store, got an oil change, and headed out on the road around 3:00 p.m. The "starter didn't work" problem seemed to be quite random as it worked sometimes and not others. I fixed it this morning by securing some wires that were flopping around.

The first leg of the trip - between San Diego and Las Vegas - was a little brutal. The traffic was ridiculous, it was hotter than hell (approaching 100) and when the speed did pick up - we were the slowpokes in the right lane. We did make it to Vegas after about 8 hours, and stayed at the Stratosphere. We ended up hitting the sack around midnight and woke up promptly at 4:30 to get back on the road. Our biggest concern was the heat - since the bus has an air-cooled engine. In Vegas at 5:30 a.m., it was 80 degrees! Leaving Vegas, on the freeway, we had a very close call. There was a guy behind us that was swerving all over the road. My dad could see (in the rearview) that the guy was falling asleep and appeared to be wasted. We kinda forgot about it, and then all of a sudden, my Dad hammers the gas and shouts out some obscenities. I looked back and the guy was only a few inches from rear-ending us at 60 MPH! After that close call, we quickly pulled over and let him pass. I tried to call the cops, but had bad cell reception and gave up. 2 miles later, we saw a car overturned in the middle of the freeway. It's likely there were deaths because the roof was flattened. It wasn't the guy who almost hit us, but I hate to think that he might've caused the accident. Scary stuff. 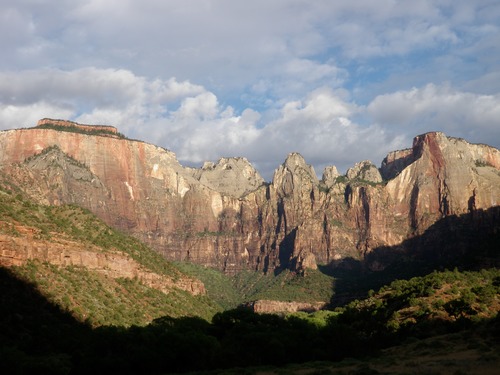 As we entered Utah, I suggested we take a back road and head through Zion National Park. From there, the trip got much better. We spent a day and a half tooling through Utah - enjoying its beautiful canyonlands and light traffic. Lastly, we drove through Western Colorado via Montrose and Gunnison and thoroughly enjoyed ourselves. The lack of traffic and awesome scenery was great. The bus also seemed to really enjoy being off the freeway. Good times, great memories.


The trip sounds great. I've driven back that way through Colorado when visiting some friends who live in Delta/Montrose. The Blue Mesa lake is georgous and seems to go on for miles and miles. Glad you made it back safely.

I look forward to hearing some stories tonight after the DenverJUG meeting and your talk on AppFuse.
Greg

Mozilla 1.6 is not showing the picture links. The only error I get is the title has quotes that javascript does not like.

Raymond, I'm using Mozilla 1.6 on my PowerBook and everything seems to work as expected. Are you getting JavaScript errors from this post or from the photo album. If it's the album, there's not much I can do - maybe change a title or two. If I can reproduce your issue, I can probably fix it.

Oh man. I rode past a forest green 60's era VW van for sale on folsom st in boulder this morning. It looked like a Green Bay Packer mobile. Green and gold. I feel obligated to stop and check it out this evening. Suhweet... It looked restored already though. At least the paint was new. So I bet its pricey.

[Trackback] This evening, Jeremy from MotorWorks Restorations stopped by and picked up the bus. It'll be in the shop for around 6 months. It's scheduled to be returned in January of next year with a straight body and a slick yellow and white paint job. The engin...