One of the reasons I love Denver so much is we usually have extremely mild winters. One year, it was 75°F on Christmas Day (no kidding). Back in college, I have fond memories of playing hacky sack outside in January. The last two winters, we haven't been that lucky. Our high temperatures have been mostly in the 20s and 30s for the last two months. Today, we got up to a balmy 53°F and it felt like spring time. Believe it or not, it actually made the news.

To celebrate, the kids and I took a walk to a nearby park and spent the better part of two hours swinging, sliding, playing tag and enjoying the nice weather. Abbie and I wore shorts and never noticed it was winter until the walk home with the sun setting. Tomorrow's high is supposed to be 60°F. You can best most of Denver will be outside enjoying the sunshine - I know we will.

Release Your Inner Hippie With The VW Bus PC

I wonder if I can get one of these in yellow? 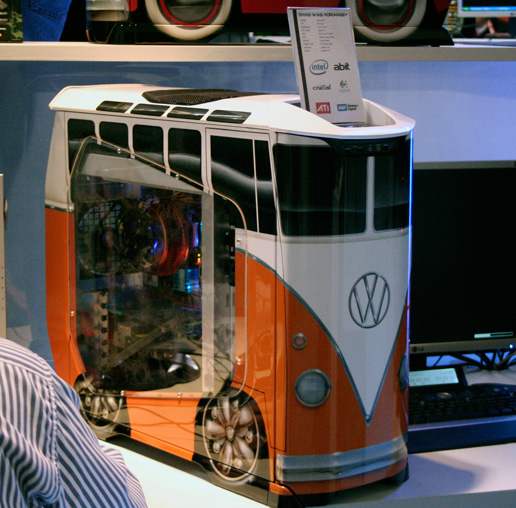 Thanks to Jim Head for sending me a link to this.

Last fall, I got pretty burned out from traveling so much. Not only did I fly out to Mountain View monthly for LinkedIn, I also attended JavaZone, Colorado Software Summit and ApacheCon US (fun was had by all). In addition, I spent a week in New York teaching a class for GE.

At the end of the year, I resolved to travel less and so far I've been quite successful. However, something happened in the last week and now I'm traveling like mad for the next 2 months. This time, I don't think I'll get burned out though. Why? Because this time the travel is more for pleasure than for work - with two trips booked to help satisfy my New Years Resolution (ski more). In addition to a couple trips to Mountain View, I'll be spending President's Day weekend in Lake Tahoe. Two weeks later, I'll be meeting up with some friends at Whistler. Two weeks later, I'll be working remotely at my parent's house in Salem, Oregon. I'll end the whirlwind of traveling in Vegas for TSSJS at the end of March.

I'm really looking forward both ski trips. I've never been to Tahoe or Whistler before.