Last weekend, Denver's Devoxx4Kids gathered at Tuliva to learn about Modding Minecraft. Several kids (ages 7-15) were introduced to programming Java by the founder of Devoxx4Kids USA, Arun Gupta, and his son, Aditya.

They used Java 8, Eclipse, Minecraft Forge and to show you how to create mods that could give you potatoes, skeleton cows, and even launch into different dimensions. The skeleton war was a big hit too. We had a record turnout at this event, and the space was fabulous. The live broadcast from vJUG went very smoothly and Tuliva's large screen and sound served us well. It was pretty sweet when we got shout-outs from the vJUG crew too! 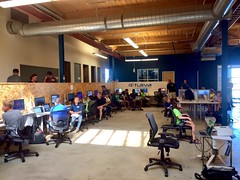 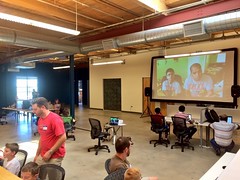 Simon Maple wrote a great summary of the session that includes the video we watched, as well as an interview with Arun and Aditya. Take a look at Devoxx4Kid's Minecraft Modding Tutorial if you'd like to see what we learned.

We did run into a couple issues while trying to follow along. The first was that the virtual machines we were using wouldn't run the Minecraft client. The error we saw was:

We later learned from Arun that virtual machines were an issue and it's better to use Forge on a local machine. The second issue we ran into was when folks tried to build Forge from source, they got a 500 error when it tried to download http://export.mcpbot.bspk.rs/versions.json. We later learned that the firewall was blocking it.

Despite these issues, I believe the kids learned a lot by watching the vJUG broadcast. I spoke with some parents that got things working in the class, as well as a few that tried it when they got home. After the modding session, I showed the class how to create a Minecraft Server on AWS. I also did some research to see if you could automate the server creation. I quickly landed on Thomas Offermann's site and his tutorials:

Thomas created a couple GitHub projects: one to setup a Minecraft server on AWS, as well as a webapp that you can start/stop it with. I haven't tried either project yet, but I hope to soon.

Thanks to all the Denver kids and parents that joined us last weekend! The Tuliva facilities were spacious and comfortable. We owe them a big thanks for sponsoring Devoxx4Kids Denver! We hope to do another workshop this fall, possibly on Raspberry Pi.