I've been tracking statistics on jobs and skills for JavaScript MVC frameworks ever since I Compared JVM Web Frameworks at Devoxx France in 2013. At that time, Backbone was the dominant framework. 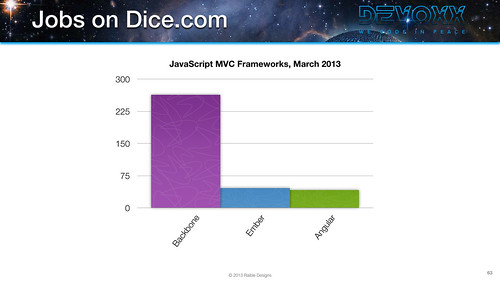 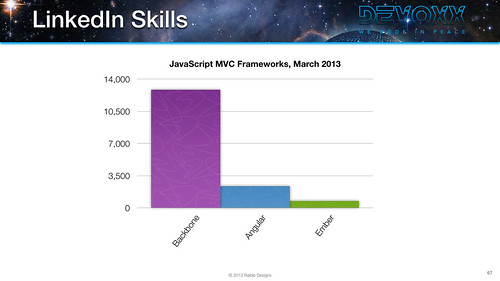 Last year, I updated those statistics for a presentation on AngularJS at Denver's Derailed. Angular had a similar amount of jobs as Backbone and a lot of people added it to their LinkedIn profiles. I found that Ember had grown around 300%, Backbone 200% and Angular 1000%! 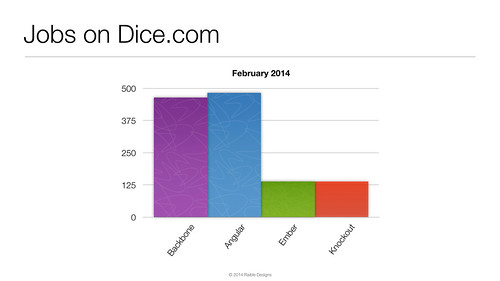 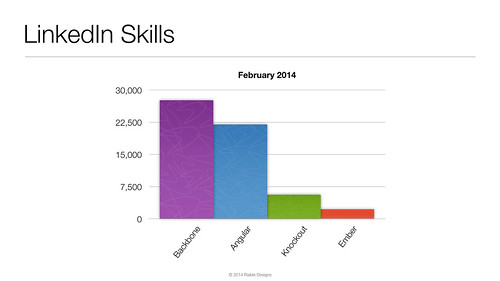 Before presenting on AngularJS at last night's Denver Open Source Users Group, I updated these statistics once again. The charts below show how the number of jobs for Angular has doubled in the last year, while jobs for Ember and Backbone have fallen slightly. As far as skills, developers learning Ember and Backbone has increased 200%, while skilled Angular folks has risen 400%. 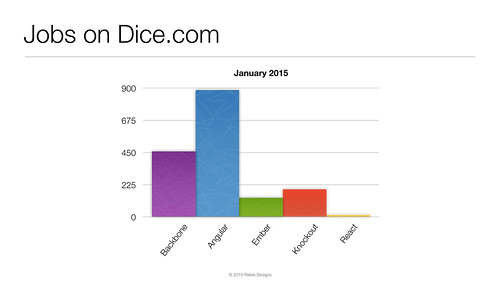 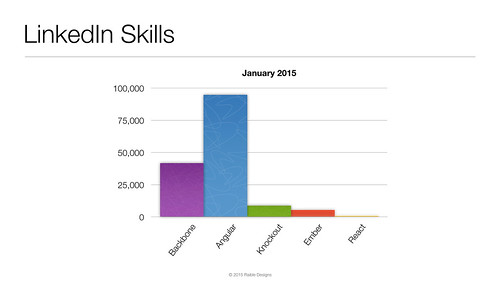 Yes, AngularJS has experienced huge growth in the last couple of years. You might even say it's the Struts of the JavaScript world. I like to say that Struts 1.x was the 'Killer App' for J2EE back in the day.

For the presentation I delivered last night, I made a number of improvements over last year's. I added a live coding demo based on my Getting Started with AngularJS tutorial. I used IntelliJ's live templates to make it look easy. However, since the audience was quiet, and some were falling asleep, I skipped over the testing demo.

I added a few slides on Foundation for Apps (FA). We've selected AngularJS and Foundation on my current project, and I've been researching how to integrate the two lately. FA is one solution I've found, Angular Foundation is another. If you know of others, please let me know.

For Java developers getting started with Angular, I recommended JHipster. I talked about its foundational frameworks and project options when creating your project. I included screenshots of its slick metrics UI and code generation features.

I also added a slide for Dave Syer's excellent five-part series on Spring and AngularJS:

Finally, I added a number of slides on Angular 2.0. I encouraged folks to checkout The Twelve-Factor App and James Ward's Java Doesn’t Suck – You’re Just Using it Wrong.

The discussion with the audience was great, particularly around HTTP/2 and minification/concatenation of assets. Thanks to all who attended, I really enjoyed having the opportunity to share what I've learned.

If you live in Denver, there's a number of interesting meetups happening in the next couple months.

I'm also looking for speakers to teach programming to kids at Devoxx4Kids Denver. Let me know if you have a fun topic you'd like to present.