This morning, I woke up early and headed down to the opening ceremonies for TheServerSide Java Symposium in Vegas. Joseph Ottinger and Eugene Ciurana kicked off the show and welcomed the seemingly large audience of Java Developers. After the introduction, Neal Ford delivered a keynote titled Language-Oriented Programming: Shifting Paradigms. You can download Neal's presentation from the TSSJS Wiki (requires creating an account).

I started live-blogging Neal's keynote, but quickly gave up when I realized it was going to be a very good talk and I'd miss the essence of it if I tried to write it down. So I closed my laptop, sat back and enjoyed. Neal is an excellent speaker and did a great job of telling a story of the next evolution in Java Development. First off, he talked about artwork, the Renaissance and the Age of Enlightenment.

The plethora of Frameworks today is similar to the Renaissance (where everyone painted Madonna and Child) in that they're all very similar, and most of them are configured with XML. XML is the external DSL that configures the framework and its needed to allow late-binding and flexibility. The reason folks use XML is because of Java's limitations as a language. There are better mechanisms (languages) to construct this DSL. He gave examples using Ruby and Groovy. Furthering the notion of DSLs are Language Workbenches that allow programmers to write DSLs that are IDE-aware, so tools like IntelliJ IDE can offer code completion and such. If DSLs are the next evolution of programming, then tools like IntelliJ's MPS (to be open sourced before year end) are going to become very important.

I think one of the most important things I took away was that the building blocks for the next generation of development is already there. Neal referenced Ola Bini and his idea of the Polygot Language Platform. He showed the following image of what the Polygot Platform might look like, where the Stable Layer is written in Java, it has a low-ceremony/dynamic language on top of it, and then a DSL that pertains to the particular application. If we start developing using this type of platform, we'll quickly move into our own Age of Enlightenment - where we're still using all the frameworks, we're just putting a prettier face (DSL) on them. 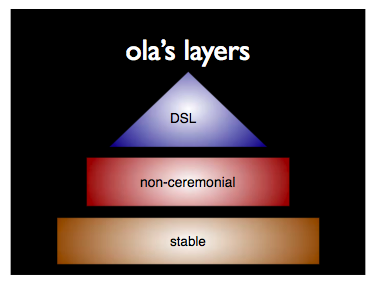 This was a very good talk that I enjoyed immensely. I'm glad I sat back and listened instead of typing like mad.

After Neal's Keynote, I went to Brian Goetz's talk on Java Performance Myths. In this session, Brian talked about how object allocation is no longer slow, benchmark frameworks are often flawed, (uncontended) synchronization is not slow and a couple other things. The room was packed and 10-20 people ended up standing up in the back. I didn't learn anything revolutionary as this talk seemed to be written a couple of years ago.

Following Java Performance Myths, I headed to my room to get some work done. On the way, I discovered the "gas is out" at the Venetian and it's recommended folks go across the street to eat lunch and such. I'm about to head back to the conference to grab some grub - it'll be interesting to see if this situation has caused any lunch chaos.

Yes, this was a very good talk, indeed. Compared to the other talks I saw today, it was very smooth - except for the code snippets just one sentence per page, lot's of video content and smooth pace - not the usual bullet point preso.

Another good session was the 'Tactical Design' - which concentrated mostly on mentoring people to use some of the design principles.

Matt: This is "exactly" what I wish I could do as a developer. I would drive the general public to choose my persistence layer (whatever it was) and end of discussion. I would say, "we're using MVC girls .. unless you have any more questions, get cracking! The requirements are finalized and already on the project web site." This would be the stuff that I would write about for Prentice-Hall or Addison-Wesley. Ola's ideas are great! I'm going to have to watch this guy. It seems that some form of inter-language communication is really needed. This interfacing is very important and will probably be the most difficult to implement. But, I really, really like the idea of doing development once, and moving on. We keep returning to and discussing the same problems that we all fully understand.