Thanks to the efforts of Robin Bramley; we now have a first draft of OpenID support in the sandbox. The code is mostly as-is from when Robin submitted sent it to me. I've done all the standard jalopy formatting of the code so it blends in and has the proper file headers.

I don't know how much this will help folks developing intranet applications, but it's pretty cool for those doing otherwise. Anyone want to take a stab getting OpenID working with Roller? It uses Acegi and supports SSO, so hopefully it won't be too difficult.

- License changing to BSD (from GPL), this should allow wider adoption of UrlRewriteFilter. (this is effective as of 3.0.4 which will be released soon)

Over the next few days urlrewrite.java.net and tuckey.org will be changed to mention this.

Sweet - thanks Paul! I continue to use (and highly recommend) the UrlRewriteFilter on almost every project I work on.

In years past, I never had much of a need for source control outside of open source projects I worked on. Now, as I create more and more training materials and presentations - it's essential. While I could host a Subversion repository myself, it doesn't seem like it's worth the hassle. I'd prefer to have it hosted (and backed up regularly) outside of my house. This week I'm looking to setup svn.raibledesigns.com.

I'm not really looking to get my own Linux box hosted somewhere. I pay around $60/month to KGB Internet for raibledesigns.com, demo.appfuse.org and appfuse.org. To get my own "managed" box is somewhere around $300/month. When I say "managed", I mean Contegix-style where I can say "install this", "do that" and they handle all the sys-admin for you. So all I'm looking for is a reasonable SVN hosting provider that'll give me 1-2 GB for a reasonable price. What's reasonable? I'd say $25-50 per month.

I'm more interested in bad reviews than good ones - but if you're happy with a service, I'd love to hear about it.

The cheapest one I found is SVNRepository.com. However, it's been an hour since I e-mailed them and I haven't had a response. Nevertheless, $10/month for 5 GB, unlimited repositories, Trac instances, etc. sounds pretty nice.

Update August 2, 2007: I ended up going with SVNRepository.com (Level Two - $6.95/month) and I've been very happy with them. I'm using them for Raible Designs' artifacts (presentations, training materials) so I don't use it on a daily basis - more like monthly.

You have to love how easy they make this.

The time doesn't seem accurate as it originally told me it'd be about an hour. Regardless, I love how easy it is to upgrade Ubuntu from one version to the next. I wish openSUSE had a similar feature. 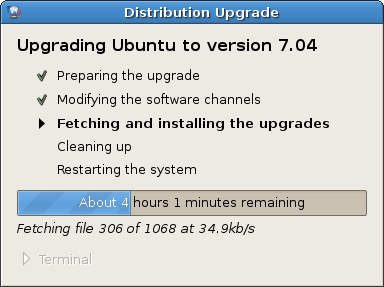 Update - during FAC: It's failed twice now and left my OS in a corrupted state both times. I suspect the MADM (or whatever it's called) prompt at the end of the download. I've entered "all" and "none" and it's failed with both values. VMWare rocks - I'm so glad I didn't ruin a working system. I'll be sticking with 6.10 for a month or so.

... and Country Bry is right - calling it by it's code name vs. the version number is pretty cheesy.