It all started in December with some gorgeous powder days and only got better from there. 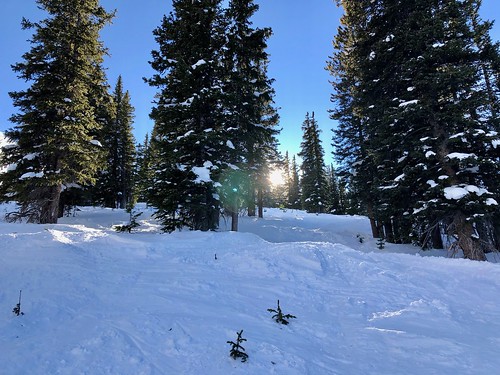 Trish and I took her birthday off (December 17) and enjoyed a beautiful day with no crowds. 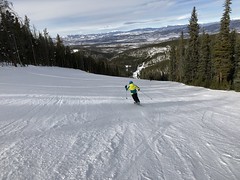 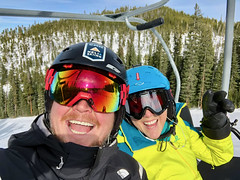 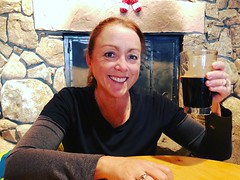 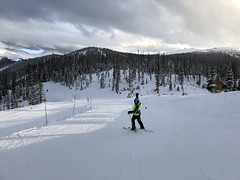 I planned things like a skiing dad should, and scheduled a family vacation in Winter Park for a week that included New Years Eve. If you've followed me a while, you'll remember that we made our dreams come true in 2011 with mountain views. 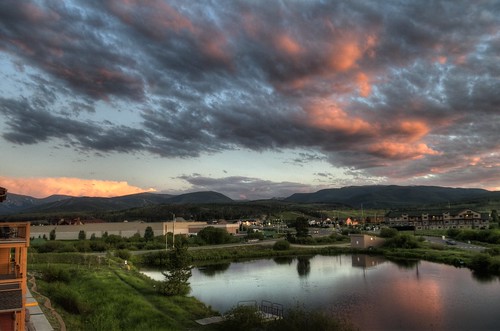 Buying the Ski Shack in Winter Park was one of the best things Trish and I ever did. It had spectacular views and provided an opportunity to make another dream come true: 42 days in a season!

Man, that place was awesome. We had to sell it when I joined Stormpath and we bought the Raible Ranch.

We have many fond memories of Winter Park, and some of our best friends live there. If you're familiar with fraternities and sororities, you'll know what I mean when I say my little brother has a place there. Trish's little sister does too. Joe and Chris are special people in our lives and we always have a blast when we get to fraternize with them.

Chris Caldes is incredibly special since she married us in 2013. 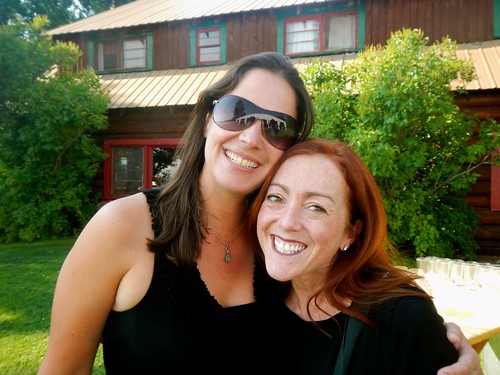 We thoroughly enjoyed partying at her house for New Year's Eve and celebrating with a plethora of folks from our rafting family. 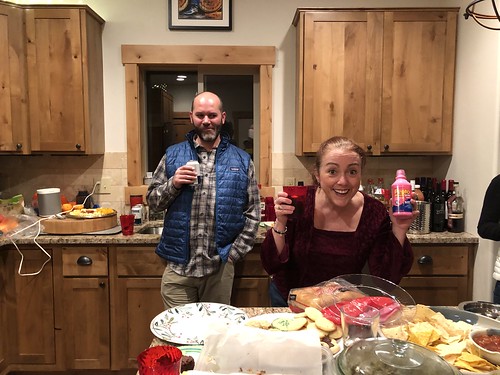 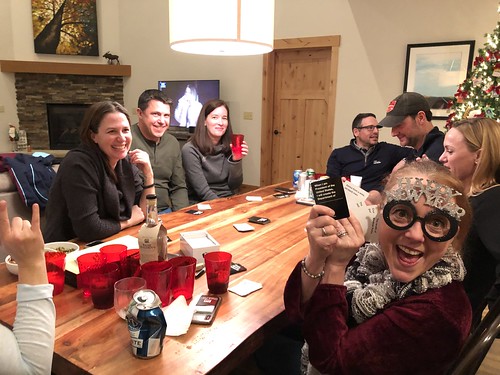 Not only did the powder fall like mad, but I rekindled my love for cross-country skiing. It was snowing so much in our backyard that I went out and bought x-country skis. Hiking with our dogs (Sagan and Daisy) in our backyard is fun, but skiing is a whole other level. There's bridal paths everywhere, and they're border collies, so I let them run free and we have a ball. It's one of the coolest parts of living in the country.

It all started with x-country skiing at Devils Thumb Ranch over the New Years Holiday. 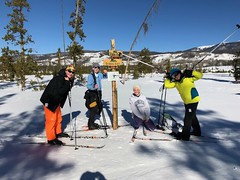 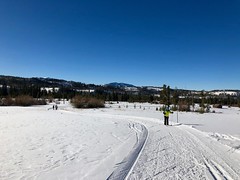 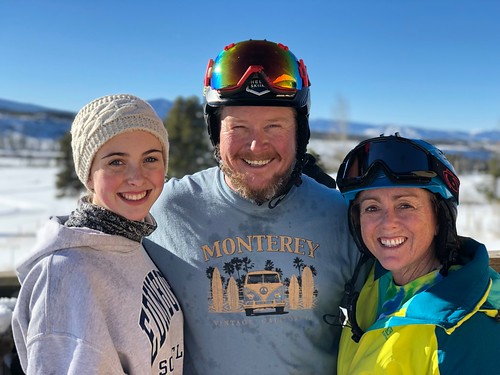 I also played hooky a few times. My co-workers wouldn't know because I'm pretty productive at work. In fact, one of my favorite stories of the year was on a Friday morning. I'd put in a lot of hours that week and when I joined the team call for the week, my friend Lindsay said "I just hope you're not working!"

That's when I turned on my my video camera and revealed that I was sitting in Stout the Syncro at the base of Mary Jane. Trish and I woke up early, drove to Winter Park, and joined our conference calls as you normally would. The difference was we were skiing fresh powder and grinning from ear-to-ear. That was probably my favorite all-hands meeting of the year.

Multi-tasking at its best: listening to the company All Hands meeting while getting fresh tracks at #MaryJane. ? #PowderDay #LifeAtOkta pic.twitter.com/WNXH5qjWwT

The other untold story from ski season is about a ski trip to Wolf Creek. I'd was returning home from DevNexus on a Friday night. As we were landing, I saw the powder forecast in Wolf Creek and texted a bunch of skiing friends.

Alonso is in Wolf Creek for the next week. There's 1-2 feet in the forecast by Tuesday. He has sleeping for 8. Road trip!

I received one positive response from my buddy Ryan Moore on Saturday afternoon.

To make it happen, I worked all day Sunday, writing two blog posts in one day. We departed early Monday morning and arrived in Wolf Creek around 1pm. Along the way, I received a reminder that I had a call with a Fortune 500 company who was interested in Okta's API. I had no reception when I received the reminder, but we found three bars 10 minutes later. We pulled over and I took the call like I was sitting at home.

Knee-deep powder greeted us that day, and we had a ball. We stayed with our friends (Chris, Mary, and Luna) that night. Chris Alonso is a very important person in my life. He was the wicked-smart computer science major that I knew in college. He's the one that showed me coding might be a fabulous career and convinced me (by example) that it's what I wanted to do. It was fitting that his newly-built house in Wolf Creek didn't have internet access, or cell phone reception.

On Tuesday morning, I needed to publish a blog post before we hit the slopes. We had a choice: go into town for wi-fi, or head to the ski resort and hope they had cell reception. We figured, "of course they'll have reception at the resort". We woke up at 6 am, left the house by 6:20 and were in the lodge by 7 am. 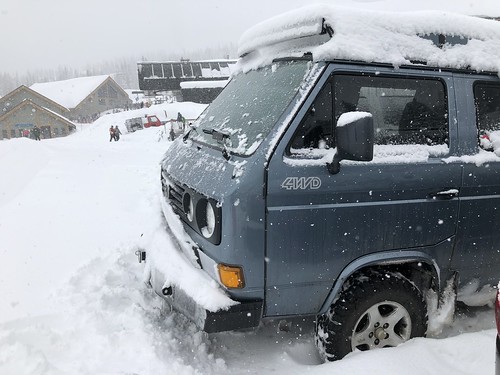 They did not have cell reception. Nor wi-fi. There was 24" of fresh powder in the last 12 hours.

We were the only ones in the lodge aside from the folks that were opening up the kitchen. A lady mentioned that she had cell reception. I asked her if I could tether from her phone to get an internet connection. She didn't know what I was talking about but lent me her phone regardless. An hour later, I had completed my task of creating a pull request for my blog post to be published.

The lifts didn't open until 10 am that day because of power issues and so much powder.

The powder was thigh-deep and glorious.

Around noon, I had to fix things in my pull request before the blog post could be published. I found the same lady, borrowed her phone again and took up a cross-legged position in the hallways downstairs (near the power outlet) to publish and promote said blog post. I tipped her $40 that day. I doubt she knows how much she influenced my wonderful skiing experience.

The crazy part of the story happened the next day. There was a blizzard warning in Denver and we knew the pass might close at 6 am (for avalanche blasting). We woke up at 5 am on Wednesday to start our journey home. Since Ryan knew the area better, he took the first shift. When we left Chris's house, he asked, "how many miles does the van get to a tank?"

We drove over Wolf Creek pass and found the nearest gas station on the other side. When we arrived, we were at 265 miles on the tank. Phew!

I drove for the rest of the trip and experienced the most treacherous driving conditions of my life. If you live in Denver, you'll remember this as Bomb Cyclone 2019 #1. We had a DJUG meeting scheduled that night, a Java celebrity speaking, and I needed to get back in time for it. The winds and visibility were absolutely ridiculous along the way. There were many times where I had 10' of visibility and the winds were so strong they almost blew us off the road. Following a snow plow just after South Park was a life saver. When we got to Bailey (1 hour from Denver), 285 was not plowed and there was a foot of snow on the road. 4WD and following UPS trucks with chains got us through it all.

While driving through Denver in the blizzard conditions, I realized that it would be a bad idea to do the DJUG meetup that night. My fellow organizers canceled the meetup around the same time. It's nuts to reminisce and realize the April meetup was canceled too (because of Bomb Cyclone #2). 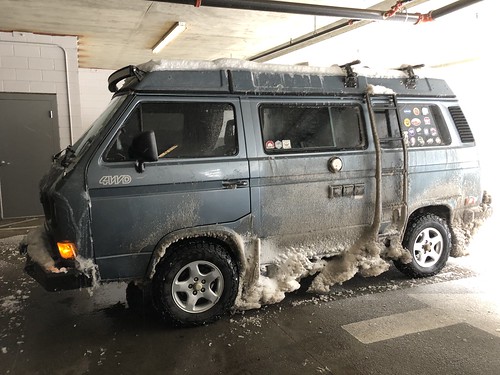 I have another good story that proves how good it was. I bought brand new powder skis at the end of February. The shop was willing to put my old bindings on my new skis, but they needed 2-3 days to do it. For the whole month of March, I never had an opportunity to do it! The powder was too frequest.

We took the kids to Steamboat for the first half of Spring Break and had an absolute blast! 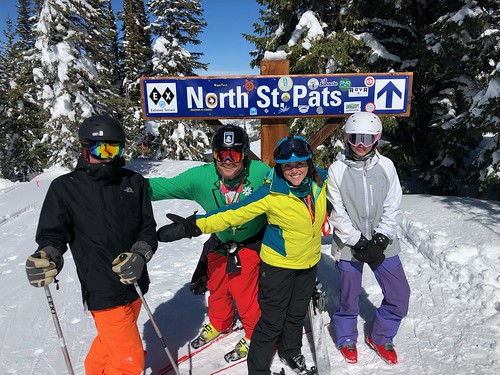 That was our last ski trip for the year. However, it did snow this week, so I did get one last backyard x-country ski in. My only regret is we didn't make it to Crested Butte this year. That's OK, there's always next year!

As is tradition, we showed both our awesome VWs in the Denver's annual VWs on the Green Show. We spent several hours polishing both rigs and are happy to report that Hefe won best in his class! He's only lost one year since we've had him finished. That was last year, and Stout the Syncro won, so we're on a five year winning streak. Next year, we plan to show up, enjoy the crowd, and not enter. We've won enough, so we'd like others to have a chance. 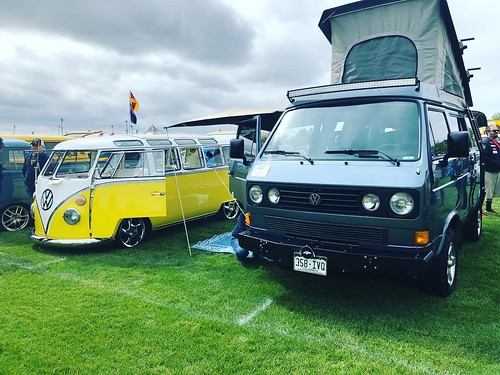 For more photos of this year's ski season, see my album on Flickr.

As I write this, I'm on my way to Barcelona for JBCNConf 2019. I'm taking the whole family with me since Trish is fluent in Spanish and Abbie and Jack have been studying it for a few years. On our way home, we'll stop in Boston to see our niece (Morgan) graduate from high school. It's a great start to a sure-to-be fabulous summer. 🌤
Posted in General at May 25 2019, 03:25:37 PM MDT Add a Comment
Comments: