10 years ago yesterday, I released the first version of AppFuse. It started with XDoclet generating ActionForms from POJOs and became very popular for Struts developers that wanted to use Hibernate. The project's popularity peaked in 2006, as you can see from the mailing list traffic below.

It's possible the decrease in traffic is because we re-wrote everything to be based on Maven. It's also possible it was because of more attractive full-stack frameworks like Grails and Rails. However, the real reason is likely that I stopped working on it all the time due to getting a divorce becoming an awesome dad.

Below is a timeline of how the project evolved over its first 4 years. 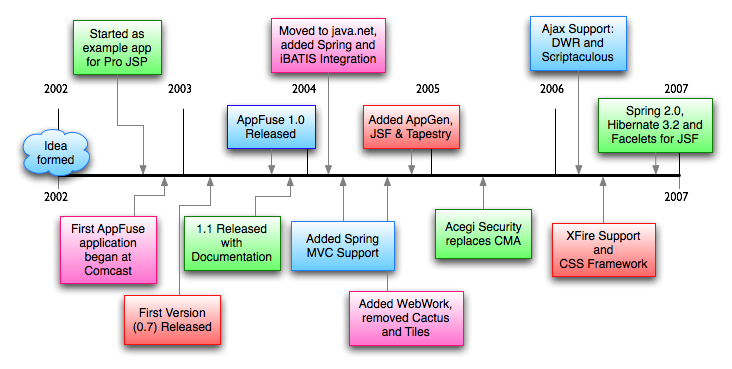 AppFuse has been a great project for me to work on and it's been a large source of my knowledge about Java, Web Frameworks, Spring, Hibernate - as well as build systems like Ant and Maven. We started with CVS, moved to SVN and now we're on GitHub. We've experienced migrating from Tapestry 4 to Tapestry 5 (thanks Serge Eby!), upgrading to JSF 2 and enjoyed the backwards compatibility of Spring and Struts 2 throughout the years. We've also added REST support, a Web Services archetype and kept up with the latest Spring and Hibernate releases.

Last year, we added Bootstrap and jQuery as foundational front-end frameworks. For our next release, we're switching to PrimeFaces, adding Wicket and changing from jMock to Mockito. Most of these changes are already in source control, we just need to polish them up a bit and add AMP support. I hope to release 3.0 before the bus is done.

Thanks to all the enthusiastic users of and contributors to AppFuse over the years. It's been a great ride!

Thanks, Matt. I used your basic setup from AppFuse starting in 2005 on a prototype project that morphed into the enterprise platform for my company. Starting with AppFuse did indeed metaphorically light the fuse.

I don't know the reasons in general that interest has declined, but in my case it was that we got our platform set up and then we were focused on building real products on top of it, so we weren't too interested in revising the platform for a while. Then I went off on to another project that was about Eclipse plugins instead of web apps.

I've used AppFuse to jump start a couple stacks over the years, at least. I don't know how I would have jumped into Spring otherwise :)

Congrats and thank you for AppFuse!! AppFuse has been a reference for many over the years.. so thanks for sharing all this work. Thank you and Congrats AppFuse!!