Raible Road Trip #70: To Jekyll Island and Back

My Dad's 70th birthday was January 16, 2015. Years ago, we started talking about celebrating this event and suggested we go somewhere warm. Trish and I proposed Hawaii, Mexico, or even Cuba. My Dad had his own idea: he wanted to go to Jekyll Island, Georgia. He spent a few high school years in Brunswick, GA and had fond memories of the place and weather. He also wanted to drive there, because road trips are awesome. At least they are in my family. We've done many family road trips over the years; the last one was in July.

One of the great joys in owning a VW Vanagon Westfalia is having the ability to sleep anywhere. Home is where your van is. We did a bunch of van repairs and upgrades last fall: rebuilt the transmission, added modern headlights, installed a Truck Fridge and a Propex heater. It was finally in tip-top shape for winter camping (or a road trip), so I suggested to my parents that we drive it to Georgia, via New Orleans. They agreed and we all smiled with thoughts of visiting the Big Easy. We'd never been.

My parents flew to Denver a few days before we started. Our journey began early Sunday morning, January 10th. We left Denver around 6am and I spent the first couple hours driving in the dark, eastbound on I-70. Within the first hundred miles, the van's odometer quit working, so we had to rely on the gas gauge to know when to fill up. For anyone that's owned a vanagon, you'll know their gas gauges are fairly unreliable. Tom Hanks even talked about this on the David Letterman show.

My mom took the second shift and when she asked me if we had enough gas to make it another 50 miles, I say "yep, it sure looks like it". 20 minutes later, we were on the side of I-70, out of gas. We grabbed the empty jerry can off the back and started walking to the next exit, which wasn't far, but it was cold. Within a couple minutes, a trucker stopped to give us a ride. I hopped in and my mom walked back to the van. The trucker, Don, was super cool and drove me to a nearby gas station and back. It was the first time I'd ridden in a semi truck and it turned out to be a pretty cool experience. We decided to stop for gas whenever the fuel gauge hit the orange zone from then on. 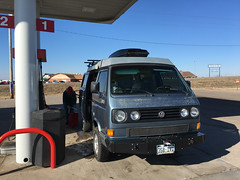 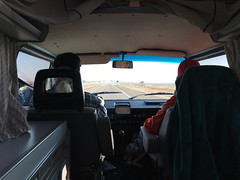 We spent the first night with my Aunt Donna and Uncle Dale, in Clever, Missouri. We had a lot of fun visiting with them and talked for hours, both before bed and the next morning. 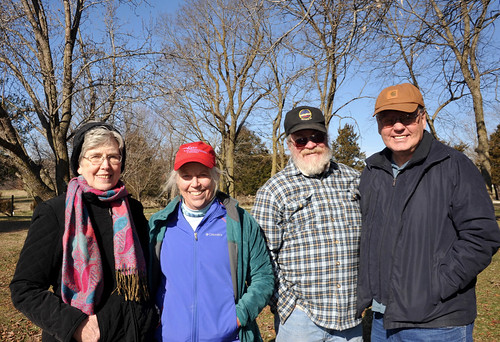 I spent that night in the van and tried out the new Reflectix insulation my dad and I made the day before. It was 12°F outside that night and plenty warm inside the van.

The next day, we drove a few hours to Hot Springs, Arkansas. We marveled at the bathhouses from a bygone era and stayed in a Hot Springs National Park KOA. 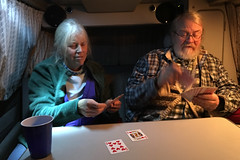 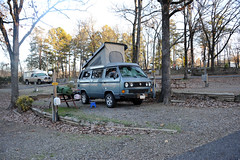 Tuesday, we drove south, across the mighty Mississippi to New Orleans. We arrived at Ponchartrain Landing, just after dark and enjoyed dinner at the RV Park's restaurant. We were impressed with the food and the live music. We caught an Uber into the French Quarter and enjoyed live music from the Treme Brass Band at d.b.a.. 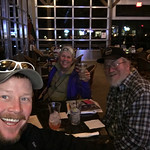 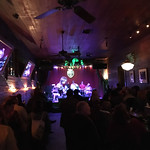 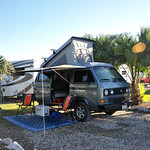 The next day, we spent touring the French Quarter, learning about its history and basking in the soulful atmosphere. 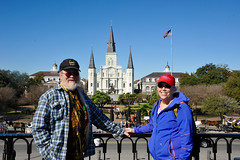 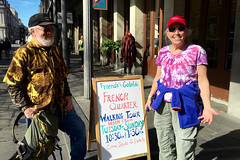 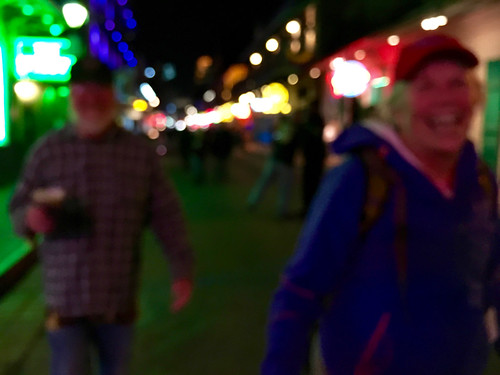 Thursday, we continued our journey, driving to Panama City, Florida and stopping to see the USS Alabama along the way. 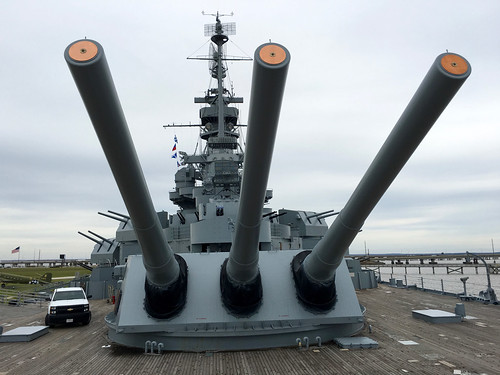 When we started driving on Friday, the Syncro had a loud knocking in the left year. I posted this to the Vanagon Owners group on Facebook and they quickly diagnosed it as a bad CV joint. The noise went away at highway speeds.

We made it to Jekyll Island by late afternoon and I took a quick nap before picking up Trish and the kids from the Jacksonville airport around midnight.

My dad's brother, Jim, and sister, Mary, arrived in Jekyll Island before we did. Jim's wife Maryann shares a birthday with my dad, so we celebrated on Saturday with cards, laughter and lots of smiles. We rented bikes from a shop nearby and had a blast biking around the island and walking on the beaches. 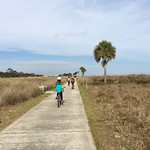 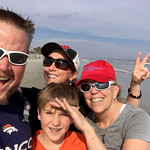 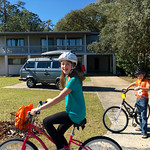 One of the highlights of the weekend was doing Jack's science experiment. He'd brought a kit to grow bacteria in Petri dishes so we rode our bikes around the island and stopped at various restaurants. We asked kitchen managers to swab their countertops for us, then we captured the result in different dishes. It was a warm sunny day and all the restaurants were very helpful. We completed our mission in time to watch the Broncos beat the Steelers that evening. 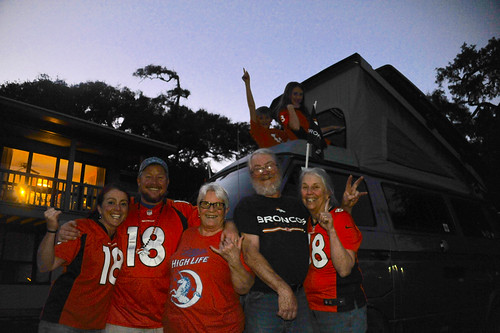 I returned Trish and the kids to the airport on Monday and they flew back to Denver. I worked remotely for the rest of the week while my parents, aunts and uncle spent long hours together exploring the island. They talked about memories of their youth, took a lot of walks together, did some shopping and did what older people do: watched The Weather Channel. A historic snowstorm was headed for the east coast and it could alter flights home to New York, as well as our route back to Denver. 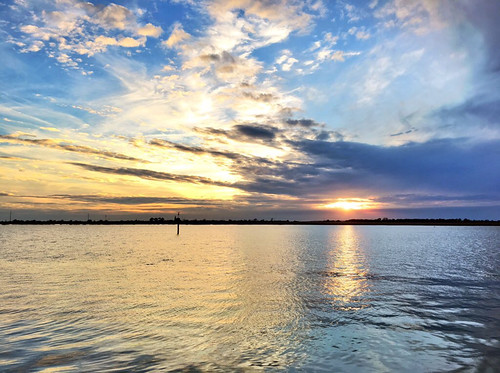 Our trip back to Denver began early Friday morning, January 22nd. I was eager to get home for the AFC Championship game on Sunday. We dropped my Aunt Mary off at the airport in Jacksonville around 7am and drove through Florida, staying south on I-10 to avoid the storm. There was lots of rain and wind, but only for a few hours. We made it to Shreveport, Louisiana that evening and stayed at a KOA. We made it 900 miles the first day. With 960 miles left, we knew Saturday would be rough, but we could make it back in time for the game!

Saturday was sunny in Texas and we spent most of the day driving through it. 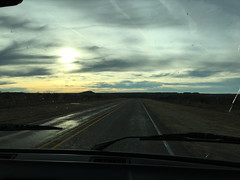 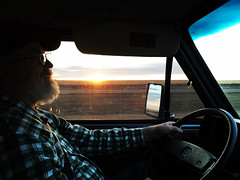 The knocking noise from the CV came back, but we knew there was no stopping now. We pulled into Denver around 11pm that night, finishing our 4000 mile road trip to Jekyll Island and back.

What a fun trip! It certainly helped that we had no breakdowns. Yes, we lost a hubcap, the CV needed to be replaced and the odometer stopped working. However, these were all easy to fix and the odometer even started working again on the way home. We made it back in time for the Broncos game and Trish and I had a blast at the tailgate before watching the Broncos beat the Patriots. 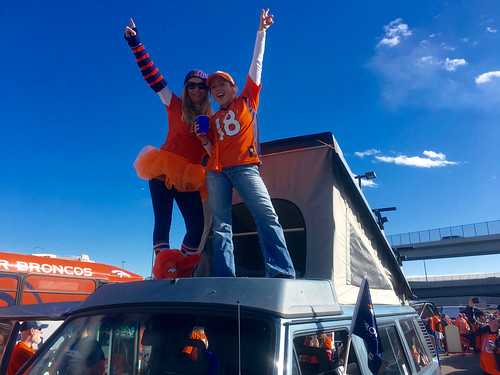 One other highlight of the trip was that The Bus was this close to being finished. The shop working on it was sending me pictures the whole time and set the expectation that it would be finished within days. Unfortunately, they discovered some issues while driving it (dead battery, leaks in the gas tank), so they determined there was still work to do. Nevertheless, they invited us down for a test drive. My parents and I drove down Monday afternoon, hopped in it for a ride and quickly broke down within a couple miles. The battery was charged enough to start it, but when the engine died at a light, there was no juice left. We pushed it off to the side of the road, called for help to get it jump-started and drove it back to the shop. With all the snow on the ground in Denver, I'm OK if it takes a few more weeks to complete. 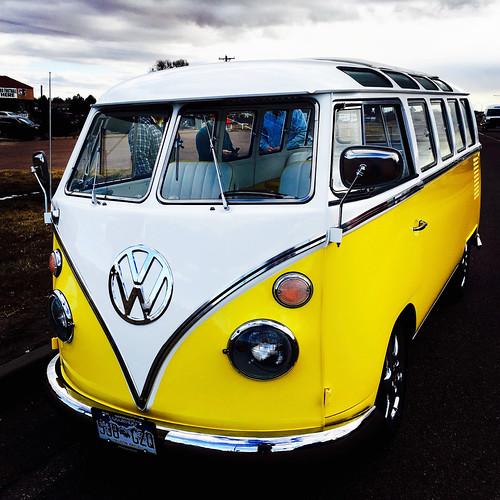 I also named both our VWs on this trip. The '66 21-Window will now be known as "Hefe", and we're calling the '90 Syncro Westy "Stout". Hefe can be attributed to its German roots and one of my favorite beer styles, Hefeweizen. In Spanish, El Jefe means "the boss", so that's fitting too. As for Stout, both Trish and I have Irish roots, we love stout beers and we've turned it into a thick and strong vehicle.

Now it's February. It's been dumping snow in the mountains and we completed our first winter camping trip with the kids last weekend. The Broncos are in the Super Bowl this weekend. Life couldn't get much better right now. ;)