2015 was the year The Bus was supposed to be finished. If you read my year in review from last year, you'll see I was certain of it. To be fair, I did have estimates from people that had me expecting it to be done in July. The good news is the interior was finished in July. Since then, it's been back at Reincarnation getting the finishing touches applied. I believe if it was worked on for a week straight, it could be finished. It's that close. So close I can taste it. THIS will be the year!

For this Year in Review post, I'll same the format I've used the last few years.

I had four different clients in 2015. The first was in the healthcare industry, the second in the API hosting space, one in the fashion industry and one in computer software. For the first client, I wrote about integrating Node.js, Ruby and Spring with Okta's SAML support. I also helped them adopt and learn AngularJS. Learning about Foundation and Angular was a nice treat too.

In March, I revisited how to setup your own software company. In that post, I wrote about how I felt when valuing time over money.

Earlier this year, I had the opportunity to work 20 hours per week instead of 40. It was one of the greatest work-life experiences I've had to date. I was still able to pay all my bills, and I had time during each-and-every-day to do something fun. When working 40 hours per week, exercising and cooking dinner were somewhat of a chore. When I flipped to working less, work became the chore and exercise and cooking became the fun parts of my day. I read somewhere recently that if Americans valued health over wealth, we'd be a lot better off. I felt like I did this when working less and that I was rich in time.

The second client asked me to do a research project where I tried a bunch of API platforms (e.g. Apigee and 3Scale) and wrote up an analysis about five different stories they provided. It was a fun project where I learned a lot.

In April, I went to work at a fashion industry startup in downtown Denver. I wrote JavaScript, CSS and HTML for them for most of the year. The location afforded me the ability to discontinue my office at Thrive, a co-working space in Denver. While I missed having kombucha and local craft beer on tap, I loved the standup desk and the office environment with conversations, banter and laughter between desks.

In November, I picked up a new client that I'm currently working with. They've recently adopted Angular and I've enjoyed the experience of working with a team of UI developers. We're putting a fresh UI on a legacy product and the team has been able to move really quickly. They're also in the Bay Area so it's been fun traveling to Silicon Valley once a month. My contract with them ends this spring.

I spoke about Angular at Denver's Open Source User Group in February and about JHipster at Denver's Java User Group in April. In the second half of the year, I re-joined the conference circuit, starting with UberConf in July. September brought me to SpringOne 2GX in Washington, DC and the Angular Summit in Boston.

Trish and I giggled with glee as we returned to the Devoxx Belgium in November. 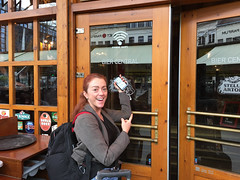 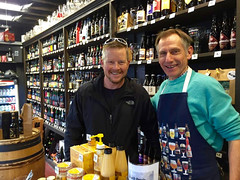 My JHipster talk was a hit and we loved our brief tour of Brugge. 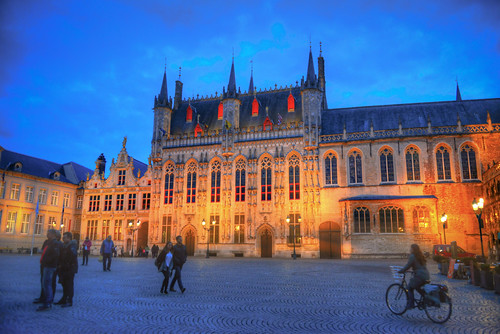 As always, the people and the memories were the best part. 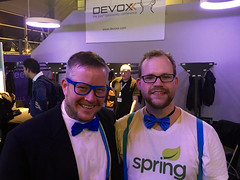 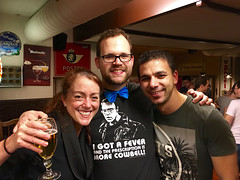 To end the year, I journeyed to Fort Lauderdale for the Rich Web Experience. After speaking, I worked remotely and networked for a few days. The networking lasted until the wee hours of the morning and good fun was had by all.

I didn't plan any Devoxx4Kids events until later in the year. The Denver Chapter watched Arun and Aditya Gupta speak about modding Minecraft in August. I also presented on setting up a Minecraft server in the cloud. In October, the talented Kellyn Pot'Vin-Gorman taught a class about coding simple games with the Raspberry Pi. It's always fun to see the kids' faces light up when they solve a programming problem.

This year, with the help of Tuliva, we hope to host one Devoxx4Kids class per quarter. If there's a particular topic or speaker you'd like to see, please let me know.

I released a new version of AppFuse in February and started working on the JHipster Mini-Book in March. To help provide updates about the book, I created a blogging app with JHipster and started www.jhipster-book.com. I wrote the book and created 21-Points Health as its example application. I open-sourced 21-Points on GitHub during my Devoxx presentation. Because of my writing and speaking about JHipster, I was invited to join the JHipster Team. I happily accepted; it's been a great group to work with.

I wrote down my goals at the beginning of 2015:

I'm proud to say I accomplished three out of five. The Bus didn't get finished and we failed to sell our house. I did create 21-Points Health, wrote The JHipster Mini-Book and maintained good health all year.

We weren't planning on selling our house this year; we wanted to find a new house and rent out our current one. However, we found a house we loved (small house, lots of land) in the heart of DTC and putting our house on the market was the best way to try and get it. Our offer failed and we endured the house-is-on-the-market dance through July and August. It was pretty sweet living in such a clean house, but we got tired of living in a de-personalized abode. We took it off the market in September and plan on renting it once we find our next home.

The worst part of the year started with a phone call from a friend in the early afternoon on October 7. My good friend, Cletus, called to notify me that he'd found our friend, Jason Miller, dead that morning. Jason was a pledge class brother of Cletus and mine in the Chi Phi Fraternity at DU. You might remember Jason from my trip to Oktoberfest in 2008. He was one of my best friends.

Jason was a heckuva guy and an awesome friend. He always inspired laughter and smiles with his witty humor. He will be missed, but not forgotten. Jason had a zest for life and a good time that we've resolved to remember annually with a brother's trip to an exotic gambling destination. This year, we'll be traveling to Las Vegas for St. Patty's Day and March Madness.

The Syncro Ski Bus had a pretty good year. We took it on many skiing adventures, with trips to Steamboat, Crested Butte, and Telluride. 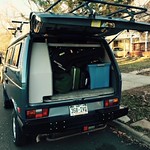 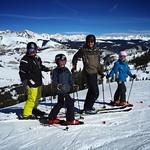 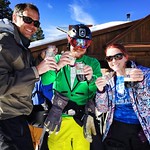 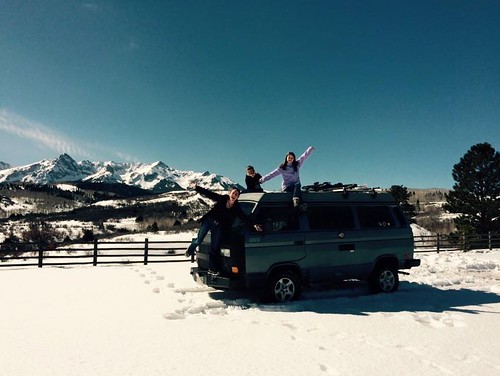 We enjoyed a couple overnights and tailgated a few times at our favorite ski area: Mary Jane. 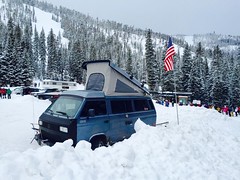 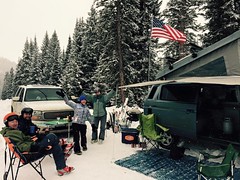 I took Jack and we met my parents in Moab in May for Syncro Solstice 2015. We took it for some off-roading, busted a cooling hose a couple times, and almost made it back to Denver. 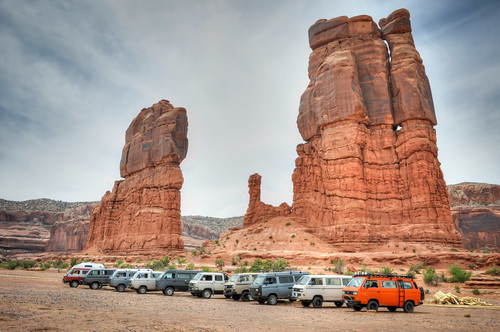 That next weekend, we took it to VWs on the Green and showed it alongside The (under construction) Bus. In July, we journeyed to Montana for the 4th of July. We drove our Westy in the Swan Valley parade while the kids rode on top and threw water balloons and candy to the crowd. We drove back from Montana in a single day (900 miles). I remember Wyoming well. Sirius XM was broadcasting the last Grateful Dead concert from Soldier Field and Trish was driving. She sang for hours, driving through the rain and fog while I dozed periodically.

Sewfine finished The Bus's interior in July. I wrote about this and many other things in Life Update: The Bus Project, New Gigs, New House and More. 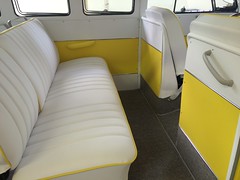 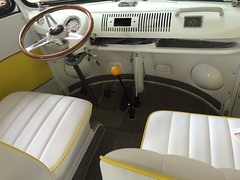 A week later, I won a runner-up trophy for the Syncro at The Colorado Bug-In at Bandimere Speedway. On my birthday, July 16, we drove it to Dinosaur National Monument for a week-long raft trip, starting at Gates of Lodore. I hit my first deer that night, driving at 3am and doing minimal damage to our German-engineered RV. The deer broke the headlight, but not the bulb.

We had some more camping/rafting adventures with it in the fall, but eventually had to take it to the shop for a transmission rebuild in November. While it was getting repairs, we upgraded a few things. It now has a South African grill, modern headlights, a new fridge and a Propex heater. It's finally become the ultimate camping vehicle, for summer or winter.

Professionally, I plan to continue speaking at conferences this year. I've submitted a few proposals to Devoxx France, Devoxx UK and I've agreed to speak at Geek Out. And did you hear that SpringOne 2016 is in Las Vegas?!

I suspect this will be the year of Angular 2 and microservices. Watch this project to see how JHipster implements microservices. I plan to pump out a release of AppFuse in the near future, implementing #NoXML and moving to Java 8.

Trish and I hope to move into a new house this year, but won't be disappointed if we don't find the right one. We have another year before Abbie starts high school at 7am.

I have no real big projects planned, except for driving The Bus. We do have a few fun vacations planned. In fact, I'm writing this while riding in the back of our Westy. My parents and I are road-tripping from Denver to Jekyll Island, Georgia. We're taking the scenic route to see some places we've never been and staying at RV Parks with the top popped. We arrive in New Orleans this afternoon and will be staying two nights to enjoy the culture and cuisine. 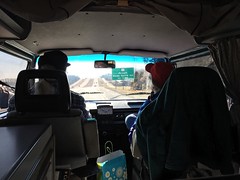 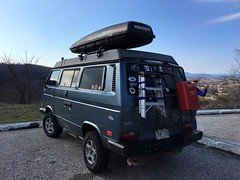 My Dad turns 70 this weekend and we planned a family vacation to celebrate. His brother and sister are joining us and Trish and the kids are flying in this weekend. We figured a road trip across the country was appropriate since we've done so many together and I happen to own the ultimate vehicle for car camping. Below is a map of our route.

In June, we'll be celebrating Trish's parents 50th wedding anniversary in Kauai. With Trish's brother, sister and children joining in, everyone is sure to have a fantastic vacation. I hope to continue the fun by working remotely from Montana in July.

When I drive the finished bus in the Swan Valley parade on the 4th of July, I'll be smiling from ear-to-ear. 2016 is the year! The long wait will be over soon...


[Trackback] My Dad's 70th birthday was January 16, 2015. Years ago, we started talking about celebrating this event and suggested we go somewhere warm. Trish and I suggested Hawaii, Mexico, or even Cuba. My Dad had his own idea: he wanted to go to J...

[Trackback] The day has finally arrived! The Bus is home 12 years and 3 days after I bought it . I detailed much of the slow and patience-heavy project in 10 years ago today, I bought a VW Bus and When is the bus gonna be done? It's a glorious day in Rai...